I'm a bit upset at how little hardware stuff I'm doing these days.  When I was maybe eleven or twelve, I dreamed of being an inventor.  Not as a profession -- couldn't care less about that -- but as a hobby thing.  Still do, sometimes, but hardware is expensive: motors aren't cheap, and modern electronics are too proprietary that it's almost impossible to salvage parts from them.

Well, being eleven or twelve I was also deathly afraid of the dark (don't lie; you were too).  So before bed, instead of hitting the lights and running across the (EVIL DARK) room to the safety of my bed, I created a pulley system; I tied a chess piece to an ethernet cord running along the side of my door, and tied some string to the knob, looping it around the chess piece like a pulley and reaching my bed.  So I'd leave the door open to allow the hallway light in before shutting the light of my room, and then, safely in bed, I'd close the door by pulling the string.

But any real hardware was a bit on the expensive side, so I stuck with software.  Software's great; everything you'll ever need to create professional-grade anything is online for free.  Never need a tutor because every technical issue ever is online, at StackOverflow or what-have-you.

After middle-school, though, I was a bit upset at having left my dreams of engineering in the dust, so I tried something in freshman year of high school.  I tried to build a turbine.

So I found an old empty tissue box as the chassis.  There was an American flag in my closet (they would appear on our doorsteps on Independence Day, for some reason), and I stripped the flag off for the pole.  It was a small, wooden one; worked nice as an axle.  Took some paper and cut-taped it to make a little fan-blade thing, and attached it to the axle so it spun pretty nicely.  And then, a candle inside the tissue box.

The idea was simple; I'd light the candle, the fire would build steam inside the box and move up through the hole in the tissue box to spin the blades on the turbine.  So I lit the candle. 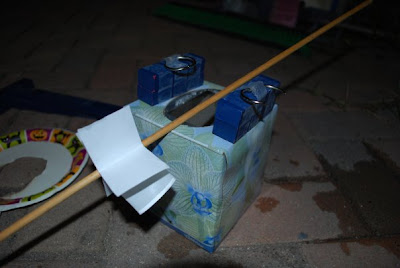 Good times.
Posted by ThatSnail at 12:41 PM 3 comments: Links to this post

Need a break from writing college essays so maybe I'll write some blog essays.  Procrastination seems to be the trend-of-the-year.

I'm Asian.  Yes, I've got the whole squinty-eyed, good-at-math, bad-at-sports thing.  Imagine your stereotypical Asian and then put a windbreaker jacket on him; that's me.

So I always get reactions from peers in the same vein, something like "You're so lucky you're Asian because that means you're really good at math" or what-have-you, and truth be told, it's actually sort of painful being Asian.  Or rather, given accompanying circumstances.  My parents speak Chinese/Taiwanese in the house and are no good at English; likewise, I'm horrible at Chinese/Taiwanese.  So communication works out something like this.

Parents: "Hey we're leaving the house, go lock the doors."
Me: "Okay. *does laundry instead*"

Parent-child talks are (thankfully) few and far between, and when they do happen it's a linguists nightmare because we're either A) asking what each and every word means or B) misinterpreting everything we're saying, so I've learned to just do my own thing and hope my parents don't mind because asking for permission is a game of charades every time.

Not complaining, though; mom and dad are fantastic people.  They're magnitudes more progressive than the typical "no food 'til you pray piano five hour!" Asian parent.  Likewise, they're a whole lot smarter and I always feel they were the sort of people overqualified for any position they were ever put in.  My dad's a cook at a sushi restaurant; he studies Chinese medicine and politics in his spare time, while my mom is a teacher and a lunch lady, even though she was a secretary in Taiwan.

Really though, I used to think it was a negative, being Asian.  And then, I noticed something that leverages any communication failures, any culture clashes, any negatives of my ancestral heritage.

We grow our own sponges.

I'm not sure that came across well, but here it is again:

WE GROW OUR OWN GODDAMN SPONGES.

There's a certain type of Taiwanese squash that grows very quickly.  It makes for a great stew and survives year-round.  It's also very soft, so you can knock your teeth out with a hammer and survive on it by swallowing it whole after cutting it up a bit.  Turns out, we use it for something different.  My dad converted the canopy in our backyard into a vineyard by stretching strings over the top.  In three weeks, the squash climbed up the supports and stretched itself over the top of the canopy, and grows by hanging itself from the strings.  After they fully mature, cut off a few for food and leave the rest to die.

When they do die, set the corpses out to dry in the sun for a week, and then cut them open.  Inside is an nifty system of fibers that resemble a soft coral.  It's completed the mighty transform from strange foodstuffs to ultimate dish-washing device.

It's by law the coolest thing ever, and I'm really happy that I'm Asian because it's this sort of cultural vitality that makes living a whole lot more interesting.  I don't even mind that I can't ask my parents where the remote is without making a huge ordeal over it.  Really glad to be a part of this all.

Meanwhile, merry Christmas, everyone, and happy holidays.
Posted by ThatSnail at 11:37 PM 1 comment: Links to this post

The folks over at the GMC set up a secret santa thing; you get a guy to make your present for and someone makes a present for you in return.  It's really pretty awesome; I made my guy a little chaotic scrolling Santa-gone-rogue thing, and I thought it was an okay gift (wanted to do something fancier and more catered to my person, although I wasn't sure what to make).

I'm a bit ashamed to post it anywhere, though, especially after seeing the gift Fatih Gürdal made for me: 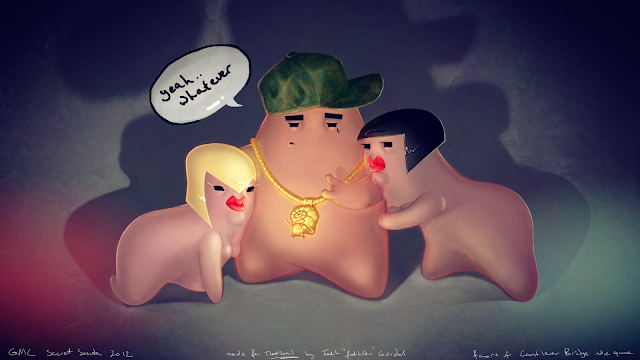 Thanks so much, Fatih, if you ever read this, and I'll probably never look at that game the same again.
Posted by ThatSnail at 9:53 AM 3 comments: Links to this post

Voyage of the Obsolete Goat is finished!

I claim no credit for it as it was essentially all Vincent's (Quantumvm on Ludum Dare) work (he did the coding).  I drew the graphics and attempted some bugfixes and that was about it.

This hands-off-the-code approach is really relaxing; takes the pain out of programming by not actually doing any programming.  Meanwhile I should mention that Vincent did a fantastic job with the code side of it.

If you're a programmer and you haven't worked on a team before, BUILD ONE NOW.  It's really a ton of fun and a whole lot less lonely than coding it yourself.
Posted by ThatSnail at 9:27 PM No comments: Links to this post


The nice thing about college apps is that they force you to make silly videos like this.
Posted by ThatSnail at 4:04 PM No comments: Links to this post 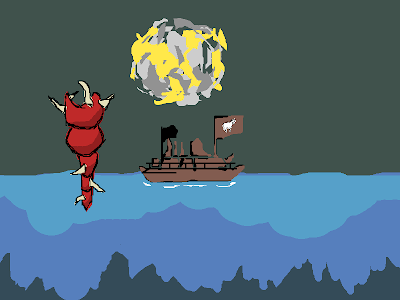 Working with @QuantumNarwhal on a Death Worm spin-off for Ludum Dare 25.  This time it's me on graphics and him on code, which is an interesting twist; it's usually the opposite.

I really enjoy graphics design.  Should do this more often.
Posted by ThatSnail at 7:27 PM 2 comments: Links to this post 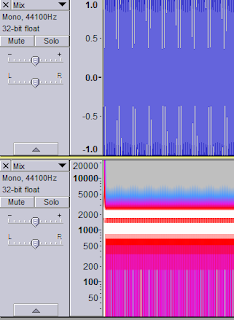 Fourier transform is a neat trick used in signal analysis that allows you to isolate frequencies within data.  Look at that badly-scaled Audacity screenshot.  The top track shows a 1000 Hz sine wave added to a 2000 Hz sine wave.  The bottom track shows a spectrogram.  Notice the white bands around the 1000 Hz and 2000 Hz marks.

With the Sketcher project, I was trying to match blobs by partitioning the image into 16x16 px images and running a 2D Fourier transform on them, and hopefully similar textures would also have similar Fourier transforms.

It turns out there's no rotational invariance at all.

Above are two sine waves and their corresponding Fourier transforms.  The top-left one is perfectly uniform, and the Fourier transform of it in the bottom-left reflects this.  Turn it 45 degrees and the transform is completely off and doesn't resemble the first at all.

So, texture segmentation this way is really awful and I'll have to try something else.
Posted by ThatSnail at 9:48 PM No comments: Links to this post

Organized portfolio for everything I've made.  Purposely left out a few that I hate.  Still under construction.
It's really nostalgic, going through these.  Even the terrible ones.

Using A Small Orange for webhosting.  Great, fast service, and ridiculously cheap ($35 a year for 250 MB storage space and 5 GB monthly bandwidth, plus $10 for the domain and $7 for domain ID protection = $52 a year).

Should mention that I really hate web design but it's gotten a bit more bearable after having learned the ropes by building this.

Doesn't change the fact that it's still awful.
Posted by ThatSnail at 2:11 PM No comments: Links to this post